Nina Totenberg Talks Supreme Court – and the Polarization of Us All 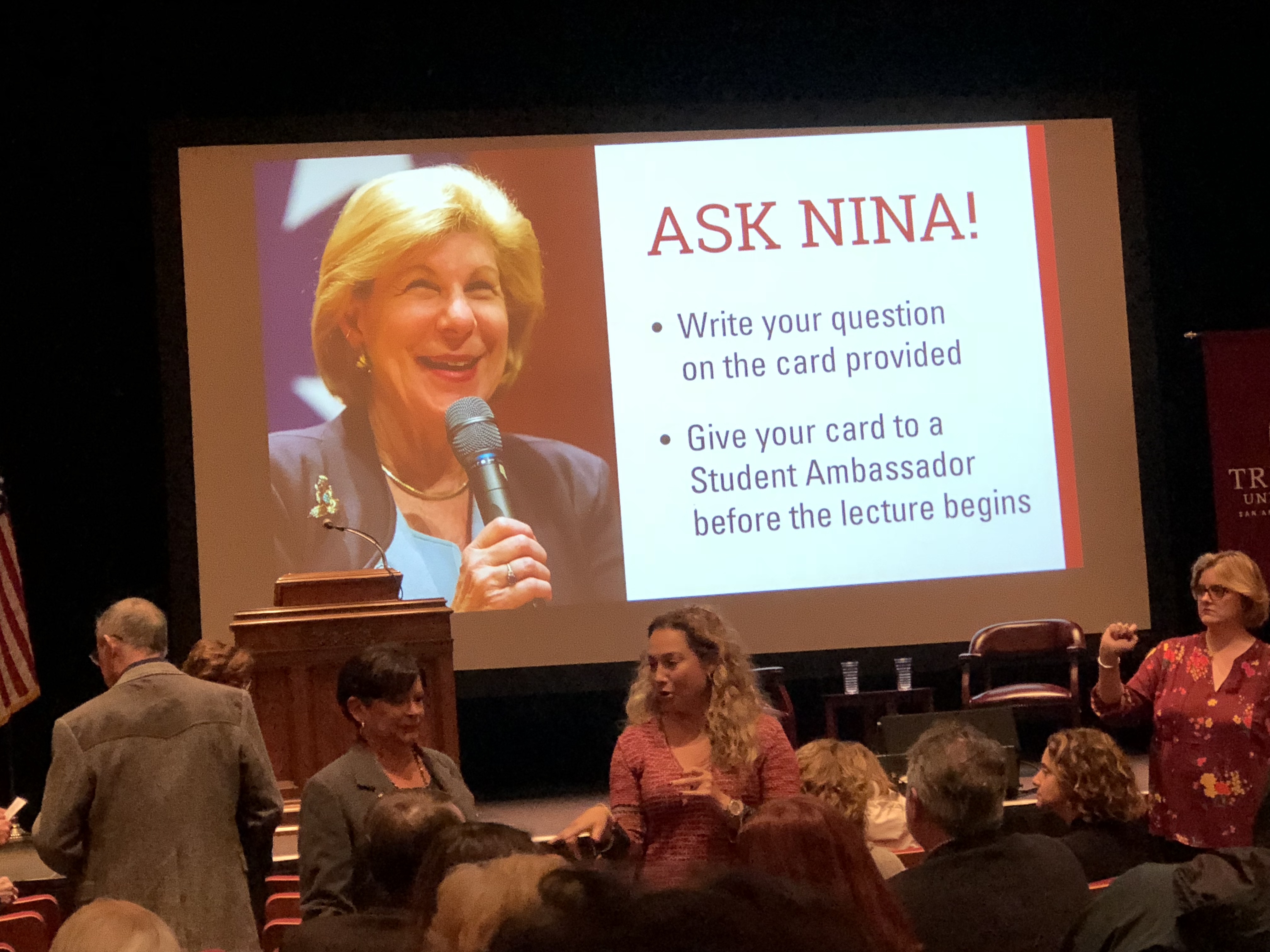 If I’d conducted the interview with NPR’s Nina Totenberg last Thursday evening at Laurie Auditorium on the lovely campus of Trinity University, you can bet that we’d get right into Brett Kavanaugh’s confirmation to the Supreme Court despite the numerous lies he told (under oath) during his hearing. After all, Nina broke the Clarence Thomas story – surely she’d have plenty to say about history repeating itself.

Surprisingly enough, the full-on topic didn’t come up until an hour into the evening via a question from the audience. (I’ll get to that in a moment.)

Nonetheless, I was riveted by the conversation between Nina and the wonderful Trinity University President Danny J. Anderson PhD, and the firsthand stories she shared from her ringside seat at the Supreme Court over the past 40+ years. Her chat was part of Trinity’s Distinguished Lecture Series.

Nina joined NPR in 1975 and has covered every confirmation hearing for every one of the sitting Supreme Court justices – the failed ones, too. She talked about her scoops, the court’s most significant decisions, how the court has changed, and she hinted at a book – or at least more speeches – in the works. 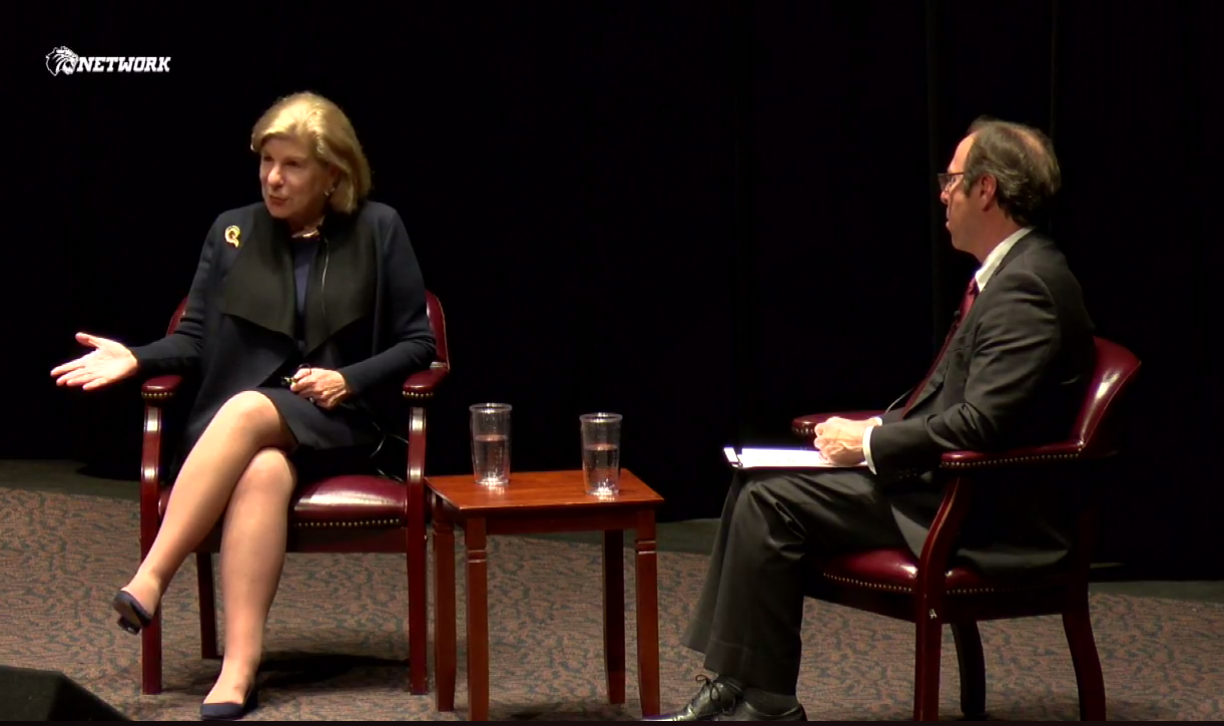 A few highlights from the evening….

On landing her first journalism job:

Few women were in journalism when Nina (now 74) landed her first reporting job in Boston. “Gender discrimination was as American as apple pie. When I would apply for jobs or call up about a job, it was not unusual to be told, ‘Well, we don’t hire women.’ Or, ‘We don’t hire women for the night shift.’ Or, ‘We already have our woman.’ The last time I got that was in 1980.”

On sexual harassment in the workplace:

We finally live in an era where women don’t have to tolerate abuse. That wasn’t always the case. “My generation of women…lived in an era where major offenses were tolerated because there was just nothing you could do about it No. 1, and No. 2, you were just so thankful to have a job. But women of my advanced age perhaps have more tolerance for minor offenses than we should because they appear to us relatively minor compared to a lot of the experiences that we had.”

On our representatives – and our entire country – becoming so polarized:

Nina recalled the time when we had conservative, centrist, moderate and liberal representatives in both the Republic and Democratic parties. The Republicans, she notes, have been ruthless about changing the rules – i.e., denying Merrick Garland’s hearing.

“I don’t think we’ve been this tribal since the Civil War. It’s tit, tat, tit, tat and it gets worse and worse. There’s almost nobody to temper the brew, and the brew has gotten pretty ugly.

On our Supreme Court becoming so polarized:

Nina says the current court is more conservative now than any court since 1930, noting that “nothing makes Mitch McConnell more emotive.” The Kavanaugh confirmation adds to the acrimony.

“I understand the passions run very high in confirmation hearings, and a great deal is at stake. But when a nominee frames his defense in partisan terms, it’s a dangerous thing because courts don’t have armies. We only follow what courts tell us to do because we have a certain element of trust in their fairness. And if we think they’re completely partisan and not fair – if a substantial number of us think that – then the court loses its authority. Ultimately, that’s how we settle disputes.

“We’re getting very close to the kind of world we lived in in the Civil War and pre-Civil War era. And that’s not good for any of us. Because this country is based on the notion of ordered liberty. Both order and liberty. And you can’t have that without a court system that it generally trusted.

And finally, a question about how the Kavanaugh/Ford story differs from the Thomas/Hill story almost 30 years earlier:

(Editor’s note – Oy, vey! The follow-up questions I would have asked!)

Her advice to those soon to graduate (and I think I loved this answer best):

Do the right thing. “I was married for 20 years and the last almost five years of my marriage to my first husband, he was very frail from a head injury. And it was very difficult. But in a lot of ways, in hindsight, those were very special years. And I never did anything that I was sorry for. I took very good care of him. One of the best things I’ve ever done was to be a better wife in those years than I’d ever been before. Because I thought it was really my duty to do that.

“When you look back on your life, you have professional accomplishments – who I am professionally is at least 50 percent of who I am. But the things I’ve done in my life that I’m proudest of are not the professional things. Because I know how to do those things. They aren’t a matter of choice – you know how you’re supposed to do your job. It’s not difficult. You may have to work very hard. But that’s not the same thing.

“It’s the things that are really hard in your personal life where there are choices. You should make the right choice, the choice that you can live with for the rest of your life.”

You can watch the entire interview on Trinity’s Facebook page.

Interested in creating a speakers series but don’t know where to start? Need an extra hand with outreach and promotion?

For community building, marketing, events and communications tips – and other fun stuff – sign up for my quarterly newsletter.

You have Successfully Subscribed!