More than 5 million of us could pick his caramel-ly smooth voice from an audio lineup. As the host of NPR’s weekly news quiz show – Wait, Wait…Don’t Tell Me! – Peter Sagal is well known for that voice and his trademark humor and witty smarts.

It was great fun to hear his voice in my head while reading his latest book, The Incomplete Book of Running. And it was just as fun to see him interviewed recently by Michael Krasny (with his equally recognizable NPR voice) on the stage of San Francisco’s beautiful Nourse Theatre – one of the excellent programs hosted by City Arts & Lectures. 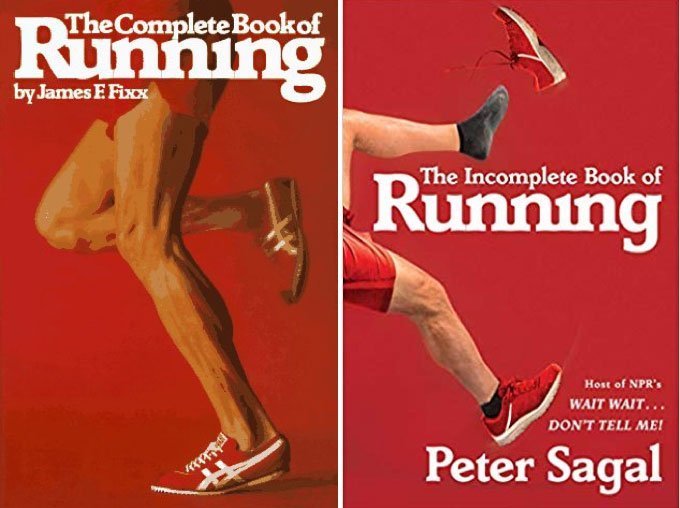 The cover and title of Peter’s book are a homage, of course, to the famous Jim Fixx 1977 bestseller, The Complete Book of Running, which inspired Peter’s dad – and my dad – and millions of others to jump into the running craze.

In The Incomplete Book of Running, Peter takes us on a personal marathon of sorts, chronicling how he got started and how and why he got serious about it in his 40s. He talks about his training, injuries, recoveries, struggling through (and dominating) various races – and then surviving his biggest struggle of all, his devastating divorce.

He even talks about his lifelong battle with body image. He still sees himself as stocky when, in reality, he’s as fit as most any elite runner – proof that few among us see ourselves the way the rest of the world does. Which is probably why, when a member of our audience asked how he keeps his upper body in as great shape as his lower, he blinked at his questioner in adoring disbelief: “I would like to die,” he responded as we all laughed. “Take me now.”

A lot of bad things tend to happen in our 40s. For Peter, it was a sad, devastating divorce. He writes about distracting himself through the pain with 14 marathons – achieving his personal best of 3:09 in the Philadelphia Marathon – which you math people have already ciphered into wildly impressive seven-minute miles. Chapter Six touches on his training.

Peter estimates that he’s covered 25,000 miles over his lifetime – more than once around the world. “And yet,” he writes, “here I still am.”

I’m a runner, too. Well actually, I was a runner. Since adopting Milo, the world’s cutest Spaniel mix, I’ve become more of a jogger/slogger – with the addition of frequent (and abrupt) stops for sniffing and tinkling – Milo’s, not so much mine.

Running (and Milo) are among the few healthy things that got me through the pain of my own sad, devastating divorce. I can strongly relate to so many of Peter’s passages, including this one about achieving his Philadelphia Marathon personal record:

“…what I have tried to remember, and occasionally achieved, is that sense of handing myself over to the moment I was in, trusting that what had brought me there would carry me through, allowing things to transpire not with effort, but with something like ease, even grace.”

Perhaps the most riveting chapter is the first one in which he shares his experience guiding a sight-impaired runner through the 2013 Boston Marathon. He was partnered with William Greer, and William’s pace had slowed to a walk toward the end of the race. “William…you just can’t walk the last mile of the Boston Marathon,” Peter encouragingly nudged.

With that, William kicked it up a notch, so to speak, and the two crossed the finish line at 4:03. This would be the marathon marred by the terrorist attack. The first bomb went off just 100 yards away at 4:09, quickly followed by the second bomb.

Peter can’t be sure what would have happened without his encouraging nudge and without William’s kicked-up notch, but I highly recommend grabbing a hanky and listening to him recount this story in Keep Going, which he performed at The Moth.

Peter shares so many special moments and insights throughout the book. I love this one: “Run long enough, and everything comes into view, be it a finish line or a home; a new one or one remade. What running has given me, most of all, is the practice of persistence. And maybe, too, a habit of hope.”

And I especially love this one: “Running sometimes sucks, but every run ends, and tomorrow is a new opportunity to take a first step.” Amen, brother.

If you’re a runner (or jogger/slogger) – or you have one in your network of family, friends and colleagues – I definitely recommend Peter’s book. It’s the perfect holiday gift for anyone who could use a little inspiration, or a reminder that moving forward is the best direction.

After all, Peter did find love again – and two dogs to share his runs with, too.

For community building, marketing, events and communications tips – and other fun stuff – sign up for my quarterly newsletter.

You have Successfully Subscribed!